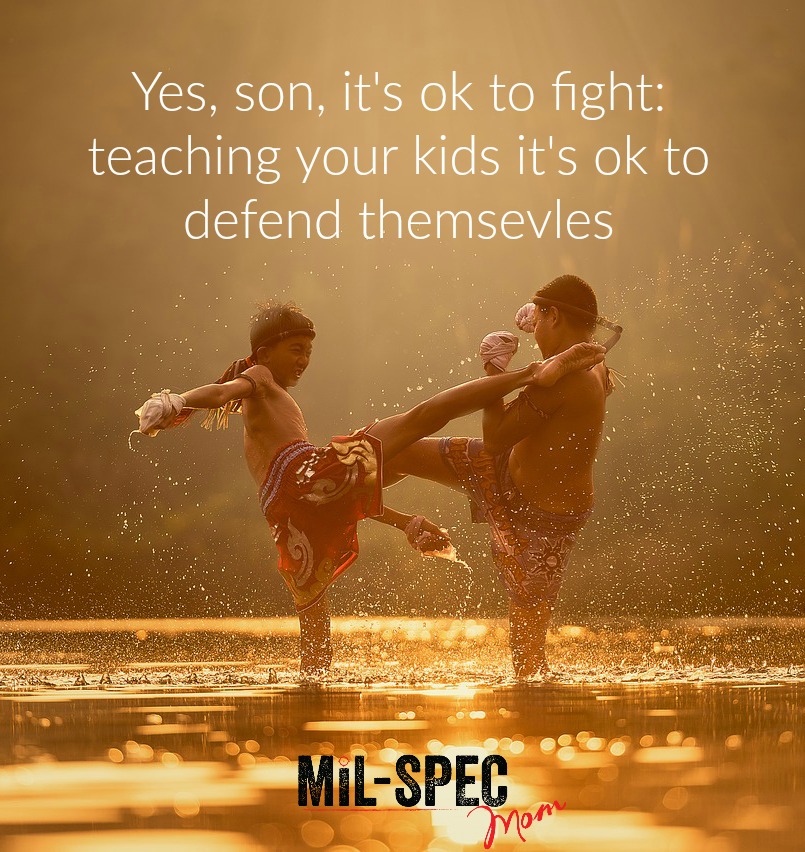 So, possible controversial post, but hear me out. We tell our son it’s ok to fight, regardless of gender.

There’s been copious news article and reports about bullying over the past few years. First off, I blame the parents for being horrendous. Teach your kids respect, kindness and how to handle confrontations and they probably won’t bully others! Secondly, parents need to teach kids that it’s alright to fight back against the attacker. WHOEVER THAT IS. Young, old, male, female, handicap, fully functional, everything. Bullies come in all shapes and sizes.

One of the main reasons that we teach our son to fight is because everyone fights drastically different. When guys fight they’re like a bull in a china shop. They throw punches, they bulldoze others, they fight predictably, to a point. Girls, on the other hand, can vicious, vile creatures. They bite, claw, stretch and other nasty things. People fighting women have a higher chance of getting their own skin broken and being infected with diseases. Granted it depends on if the woman is affected, but the chances are much higher with women.

Last week we witnessed a small version of how vicious girls can be. At our own library story time there was this young girl, maybe 3, who suddenly wanted a cushion of the young boy sitting on it. Now, mind you, this little boy had been sitting on this same cushion, listening attentively, for almost an hour now. This little girl suddenly got the notion that she needed this cushion. It was her precious. When the little boy wouldn’t move she started crying and screaming at him. He did his best to ignore her, but 3-year-old girls so insanely loud when they want to be. She started hitting this boy, scratching him and poking his eyes! You know what her mom did? She suddenly found the ceiling very interesting and pretended not to notice! Granted that little girl needed some motivation to her behind but I completely blame the parents for how horrendous she acts! There comes a point in every child’s life and actions can no longer be blamed on the parents. This little girl is NOT to that point yet.

Ronan witnesses this and we had a really good discussion out of it. We play a game with Ronan called “Head on a swivel”. Randomly throughout our day, no matter where we are, I will say “Head on a swivel!” Ronan then looks up from where ever he is and tells me everything he sees. If he is playing here at home, he goes out and looks out the window. When we are at a store he will tell me all the people around us that he sees. If we are driving he tells me the cars he sees. A simple little game like this increases his situational awareness. Even in the mind of a 5-year-old boy.

When we tell our son it’s ok to hit girls we mean it, we also mean that it’s ok to hit boys also. He has been taught from an early age to be gentle with girls. He has a 3-year-old niece that he plays wonderfully with. But a bully is a bully and a threat is a threat. Kids need to know this! They need to know that it’s ok to fight back, that it’s ok to protect themselves and others who can’t! They need to know that standing up for themselves is necessary. My husband and I are not advocates of violence. However, it does solve the majority of issues in situations like this. When you have a threat presented to you and you are caught off guard the only way to get the upper hand is to present a swift and overwhelming countermeasure. Meaning that you have to go BIG! This basically scares the crap out of the bad guy and now you can take what measures you need to in order to exit the situation or stop the threat.

Our son has been in martial arts for a while now and he will continue to be until for as long as possible. Martial arts, whether it’s Tae Kwan Do, Karate, Krav Maga, etc, all teaches some level of discipline. You don’t want to let your child loose with the skills to hurt people without instilling proper discipline into their little brains! They need to know that there are limitations present, they need to know when to stop or they will be so overpowered by emotion and adrenaline that they could do serious harm.

We have instilled in our child to never start a fight. Lord willing he will never swing first. On that same note, we have instilled in that he needs to defend himself and that there is no such thing as a fair fight. We have taught him that he needs to defend those who can’t defend themselves. We have taken the time to simplify and explain the hard things to him. We’ve also have taken the time to explain to him that some people make bad choices and that they’ve made those bad choices before deciding to act and that the Lord asks us to protect ourselves and protect others. The bad guys’ relationship with the Lord is the bad guys’ responsibility, not ours.

Is unplugging the key to better parenting