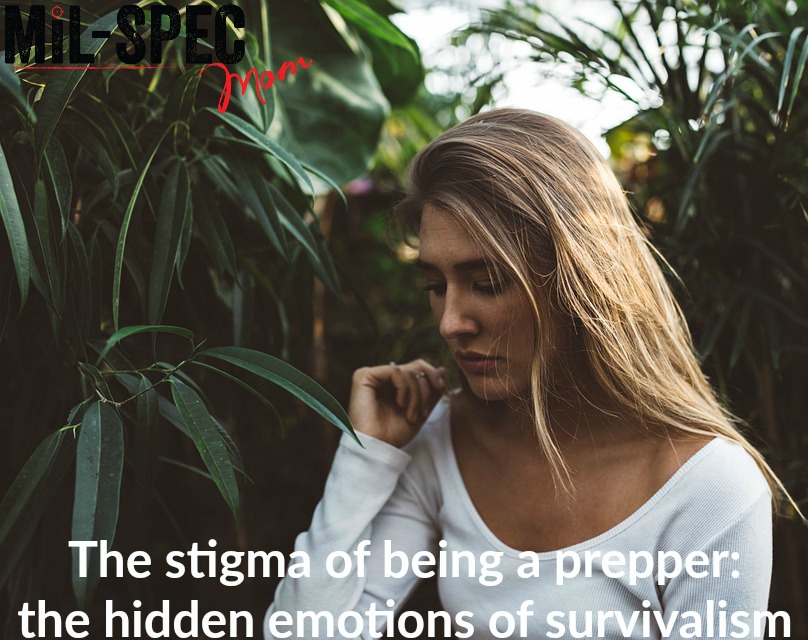 The stigma of being a prepper: the hidden emotions of survivalism

The stigma of being a prepper: the hidden emotions of survivalism:

The stigma of being a prepper. When you hear someone say “I’m a prepper” or “I Prep”, what’s the first thing that goes through your mind? I recently asked this question to my FaceBook friends. I was shocked at the positivity of the answers, but all the answers sounded much the same. They think it’s a good idea, they may or may not prep a little, but their biggest issue was that it was fear induced. They felt a need to prep because of fear. Fear is a very strong emotion, but it does not have to be a negative one!

When I first got my learner’s permit to drive I was terrified. I didn’t know what I was doing, I didn’t want to mess up! But as time went on and I got more knowledge by taking Driver’s Education and got more experience driving I became much more comfortable. This is the way it went for you too, I bet! This is how it works with everything! Whether it’s cooking, sports, using a firearm, or diving into survival. It takes time and persistence to learn a new skill. Much like riding your bike did!

When I got married to my husband he was lightyears ahead of me in prepping. Not only in the physical supplies, but in the mindset. By mindset, I mean overcoming the fear involved in the “why” of survivalism. It was an extreme fear, I had when I first started seeing the need for prepping. I was seeing all the ways my children could get hurt and how difficult it was to get started. A lot of time, energy, and money needed to get this started was what I saw.

What I saw the most though was my inability to protect my children from everything. It made me feel weak, incompetent, and honestly angry! This is where my faith comes in. I can only do what I can do and I MUST trust God with what I can’t do.

I was so fearful, in fact, that for the first year of my marriage, each time my husband asked to talk about survival or prepping I shut him down. Or I shut down rather. It could be both. I’m not sure, but I know we didn’t talk about it. I couldn’t talk about it! I needed to sift through all the emotions, responsibilities, and exactly what this entailed as a mother.

Fear is a powerful motivator. Especially when used properly.

The terminology break down:

These guys are the ones you see on that show “doomsday preppers”. They have years’ worth of food, water, supplies, and ammo stored! People in this category often are buying the latest and greatest supplies or toys and have no problem going into debt to get these toys. While it may seem like they’ve got it all together it’s just a little intense. It’s all they think about, all they talk about, and all they do in their spare time. They’re obsessed with it.

I like to think of this as the normal or average degree of prepping. This group of people understands that there are natural and unnatural circumstances that might be to be planned for. They have some supplies on hand but handle it even-keeled as far as finances and obsession go. They plan for their purchases, they are strategic with what they need and why.

This group of people understands that there may be bad things that might happen, but don’t focus much time or energy into it. It’s not because they don’t see the need for it. They either don’t know where to start, they’re too scared to get started, or they don’t make the time for it.

The unfortunate thing about being a prepper is that “prepper” is the only term for it. Prepper can be used to identify people in the prepper light category all the way up to the “prepper stout” folks and beyond. The term “survivalist” has less of a deranged meaning to it, but it’s still there.

What we need to do, as people trying to figure out what shade of prepper we are or want to be, is understand that the stigma is there. Our intentions might be good, but others might not see that. We could be in the prepper light category and people see us as the prepper stout folks! That doesn’t matter, though. Really, it doesn’t.

It’s still an odd feeling when people see or treat you differently because they heard that you’re a prepper or you’re “into guns”. This can also change how you interact with people. The issues that you face at home might be different than what others parents face. When your child gets in trouble at school, and the teachers know that you’re a prepper, it can strike fear in your heart of what the outcome might be. Will you child be disciplined differently than other kids because of your choices? Will they let things slide assuming that you run family survival drills at home and its common place?

The honest answer is probably not. They might see you differently, but that doesn’t mean they care! Just because another family in our church doesn’t want firearms in their home doesn’t mean that I treat them any differently than I would any other family. We still want to be decent human beings regardless of what our beliefs and practices are. You need to remember that others might know you’re a prepper, but the chances of them caring or treating you any differently is slim. I’ve found that the person that has the most stigma is me! I assume that people treat me differently. I assume that I have the friends that I do and run in the circles I run in based on these choices. It’s a wrong assumption.

If you feel that you’re providing and protecting your family efficiently then it doesn’t matter what others think. It also doesn’t mean that you have to talk about it. It certainly doesn’t matter if you’re still scared when you get started, use it to push and guide you!

A guide to being a practical prepper: Don’t make French toast during the apocalypse.

How to find your tribe