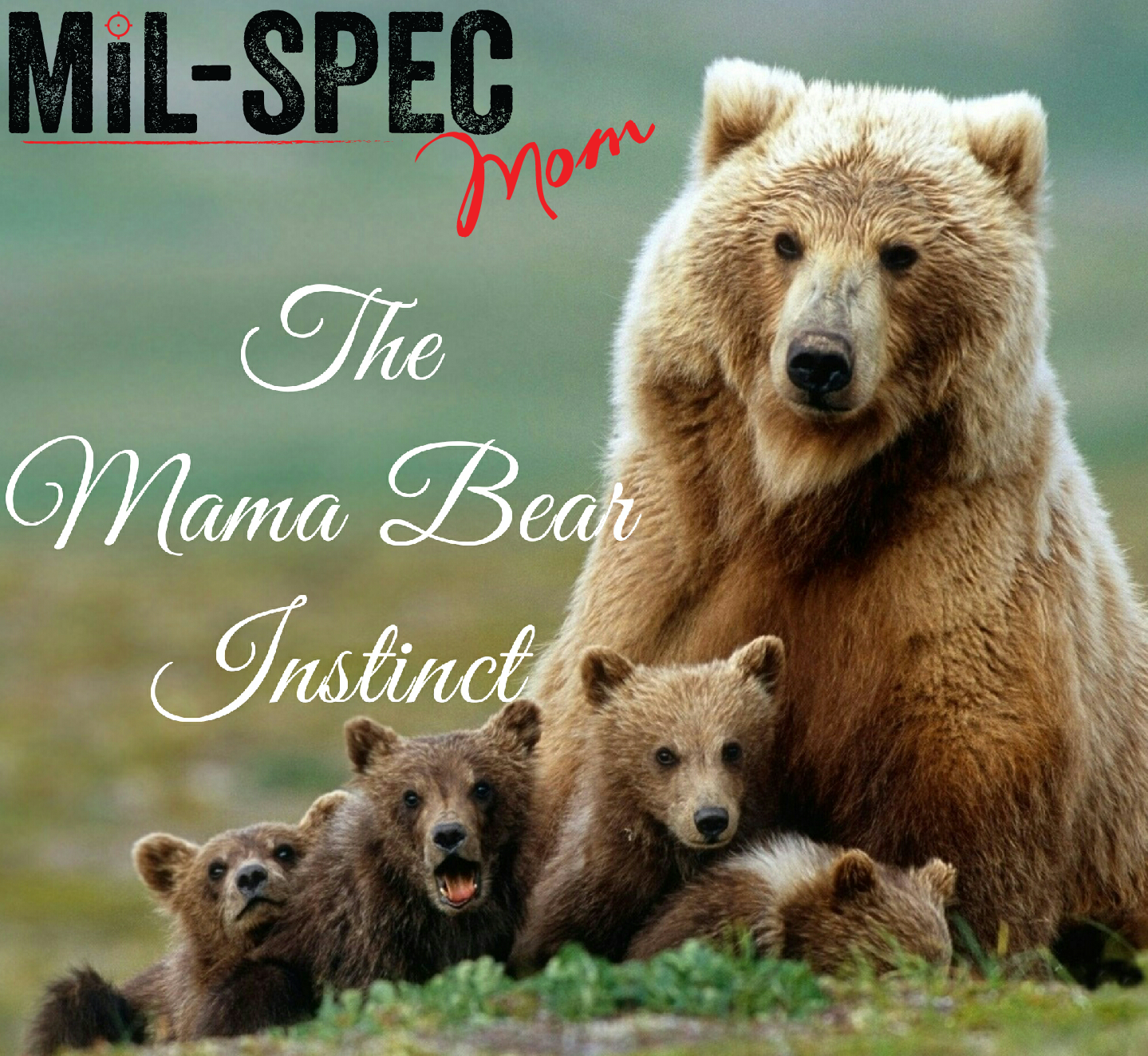 I’ve been working on conceptualizing this blog for a while. The mama bear instinct is something very near and dear to my heart. It’s a topic and concept that is very important to me and even more important that others know about. Many of you know that I am not law enforcement and not military. All of my knowledge comes from the hundreds of hours of training, researching, learning, and asking questions. I will say that not all women have this intrinsic trait that we’re going to be talking about today, but for the sake of this article, we will assume that all have a little bit. I say this because I haven’t yet met a woman who doesn’t.

Today’s topic is called the Mama Bear Instinct. All females have a mama bear inside of them. You know that inner rage you get when someone messes with your kids or your husband? That’s the mama bear; the fierce protector. This mama bear instinct interprets survival and preparedness by how it affects others; namely her family. We see things differently than men. You might be thinking “well that’s obvious!” And naturally, it is! Our husbands and significant others as being from another planet at times! But, when men think about preparedness they think supplies. Whether it’s food, ammo, water, shelter, fire starting equipment, they rarely think of the emotional aspects. This is where we differ; we think supplies AND emotional well-being.

As I said earlier that some women only have a sliver of the mama bear instinct and I believe this is primarily because they live in an intentionally happily oblivious world. They have the “oh it’ll never happen to me” syndrome. Some women just don’t care, some woman thinks it’s ONLY their husband’s job to prep, some are just too busy and unwilling to make time to learn, and some women just overwhelmed with where to start. Other women, however, have a huge mama bear instinct because there has been a time in the past where their children (or themselves) have been threatened. That mama bear has come out, for good reason, and had to make a scene for the survival of their young. Once the mama bear is unleashed we start to get a clearer picture of how important and how fierce our inner mama bear can be.

Now, women perceive threats differently than men do. Men are creatures of actions while women are creatures of feelings and intuition. For example, rarely do men get agitated enough to start a physical confrontation because someone is looking at them weird or inappropriately. However, if a woman is getting looked at weird or inappropriately we feel something. We feel violated and we fear for our children. Our mama bear starts growling because we are uncomfortable. Furthermore, when we tell the man that we are uncomfortable THEN the man will start a physical confrontation when he feels his woman is threatened. Now that being said, women who have the knowledge and the ability to act on the feeling have a huge advantage. Meaning that women who are trained and confident in self-defense definitely have a more mature mama bear than others who don’t. The maturity of the mama bear is important. A quote from Shakespeare’s King Henry The Fourth, that I love is “Discretion is the better part of valor.” The mama bear must be tempered with wisdom.

The mama bear instinct normally comes out when our children or family are threatened. If it’s a critical stress situation, like a severe wound, an attempted kidnapping, or even a bully at our kid’s school, it’s important to understand how the mama bear works and know that we might have to reign her in at times. Our mama bear instinct is primal and she is emotional and she can be very intense sometimes. Due to the intensity of our mama bear, we may have to tame her a bit. We don’t want to go around looking for a perceived threat under every leaf. If that were the case and we lived like that, we would never leave the house for fear of harm. That concept goes against being prepared. There is a fine line between paranoia and preparedness, we MUST stay on the correct side of that line. We want to be prepared and practical in our interpretation of our environment. This means that having the right mindset is CRUCIAL.

Women definitely have the advantage when it comes to situational awareness. We are perceived as the weaker sex. This can work to our advantage. Especially with the amount of stuff we have to carry in our purses and diapers bags, people don’t often think that mothers can be trained and fully capable of handling more critical situations. Much less carrying a firearm and employing it effectively. Our alter ego, if you will, can become the fiercest of protectors and predators. We can handle most critical stress situations without emotional recoil or PTSD simply because we did what we had to do to protect our young. We can compartmentalize this very effectively and by having this mental filter we can see more avenues to prepare for than men because see the emotional aspects rather than just the supplies and the potential tactical attack or threat.

Did I just find a cute & functional concealed carry purse?!

The false gods of self-defense