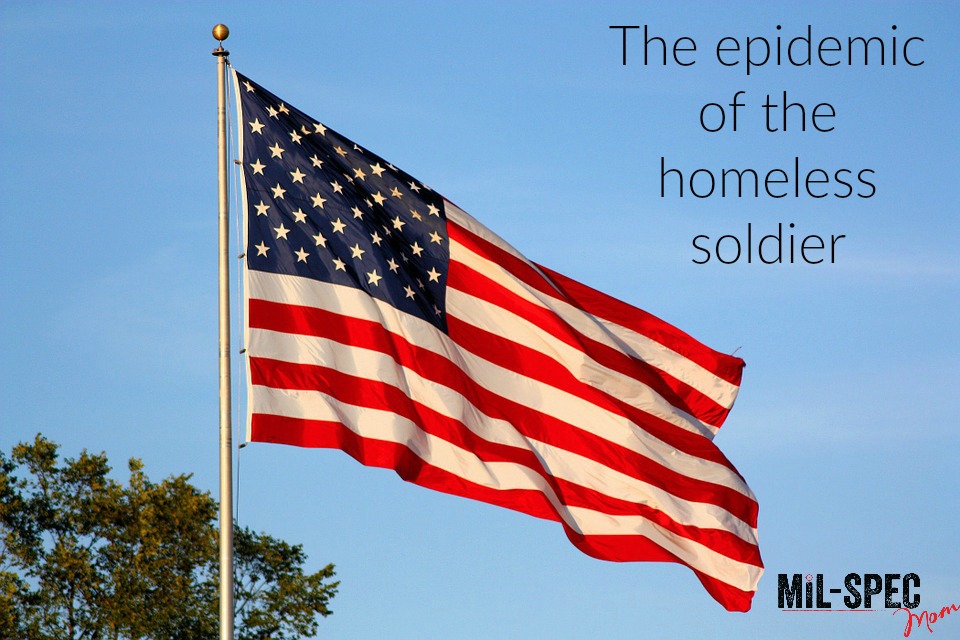 The Epidemic Of Homeless Soldiers

This doesn’t sound like homeless soldiers should be a thing, but it is. It’s a big thing and by thing, I mean a problem. Did you know that the number of veterans that are homeless is a staggering and disgustingly high number? How does 40% sound? Roughly 40% of homeless males are veterans. PEOPLE WHO FOUGHT FOR OUR COUNTRY! They are considered homeless. According to the National Coalition of Homeless Veterans homelessness is described as:

“An individual who lacks a fixed, regular, and adequate nighttime residence; and

This is heart breaking! Our soldiers deserve better. They deserve so much more than a park bench after coming home from war. But, what makes veterans susceptible to homelessness? 40% is too high of a number to leave to random chance. In the two websites mentioned above, many veterans deal with PTSD, TBI, substance abuse and other such issues. These issues can greatly impede the “normal” standards that many housing places have. According to the Department of Veterans Affairs, 76% of veterans have a “mental illness” as defined by PTSD, TBI, substance abuse etc. Also, the DVA (Department of Veteran Affairs) states that “in 2010 20,000 veterans with government-sponsored mortgages lost their homes.” This could be because of the “mental illness” stated above or a different issue entirely. Another reason the DVA claims for the homelessness is that within the last year, almost a million veterans have hit the poverty level. ALMOST A MILLION!  This is probably because 30% of veterans are unemployed. But why? The national unemployment rate is roughly is 5.9%. So why are veterans roughly 25% higher than the national average?

According to Military.com, less than 20% of military occupations are in combat. That means that 80% of them are support roles for those who are in combat. Support rolls can include medical personnel, logistics, supply, etc. Although these positions are vital in the armed services, they don’t always translate well into civilian life again. There could be a soldier in logistics, best in the battalion, but finding a civilian crossover job can be difficult.

According to www.bullets2bandages.org, 37% of veterans need assistance finding housing. On top of that, 45% of veterans need assistance finding a job. Why are we not helping these Soldiers?! There are very few resources to assist the soldiers back to civilian life. One of the few resources there are for employment is a website called Www.Hero2Hired.Com. They help find jobs based on soldiers MOS. This can be handy, but for those tough MOS’s like Infantry (11B), MP (31B) and other combat related MOS’s finding a good civilian crossover jobs can be difficult. How do you find a civilian job, coming from infantry, on a job site like Careerbuilder.com? Do you think they can type in “door kicker”, “security”, “Objective assault” or “ambush” in the search bar on that job site and have it actually come up with something that pays more than minimum wage? Not so much, I’ve looked!

So what do those guys do? That’s a great question! There are a few options, but unfortunately isn’t a plethora of options that are easy. It would seem the easier thing to do would be to go to a trade school or get (or finish) a college degree. Because of the GI Bill and another school financial aid most schooling would be dirt cheap or even free. However, during that time they will need a job to pay the bills until schooling is finished. Another trade school option is to get a CDL license. With one of those, you can start out, ENTRY LEVEL, making roughly $60,000-$80,000 a year! Other trades include HVAC, Appliance repair, pharmacy tech, and paralegal etc. The one issue I foresee with infantry Soldiers is that none of those trades will give the Soldiers the adrenaline rush that they once felt. These jobs are probably not going to give them the same kind of job/moral/personal satisfaction that being a Soldier once did. My husband has had an issue with job satisfaction. He doesn’t feel like he’s doing a good thing for the world often anymore, there isn’t much personal satisfaction in his employments after the Army. You just don’t feel like superman when you’re not runnin’ and gunnin’.

So how does employment tie into housing? In many ways. If a veteran can’t find or hold a job, they don’t pay the rent. If they don’t pay the rent they don’t have a home. End of story. It’s vital that the soldiers know that they’re probably not going to find a job that gives them the same satisfaction that being a soldier did. Life is different back home. I strongly believe that the military needs much better civilian reintegration classes for these guys.

Now, in contrasting younger veterans to the Vietnam War, Korean War & Gulf War veterans there is a huge difference. Younger military veterans seem to be so fed up with the military and the ridiculous bureaucracy that they just want out and will “figure things out” when they get out. There is so much silly “hut, hut, hut” these days that they just want away from the crazy. Most of the homeless issues arise from our older vets, however. When they got out of the military there weren’t resources for them to get a trade skill. They jumped around from place to place or job to job, all while suffering from PTSD then getting involved in substance abuse because of that. They need help.

Basically, the problem is this. Our older vets need help. Whether it’s through no fault of their own, or it’s entirely their fault. They need resources for housing, resources for sobriety and PTSD. Did you know that there are almost a million veterans on public assistance? This includes food stamps, public housing, unemployment etc (article here).  This is a problem. It’s an epidemic. I don’t have all the answers, far from that in fact. Before doing research for this blog I had NO IDEA that this was such a huge issue. I challenge you to do your own research whether on the google or Pinterest. It was shocked at how many statistics there were.

I also challenge you to get involved in your local VFW unit, or your local shelter. Better yet, start a “veteran help” program through your local church or other such organization. Veteran homelessness should be something that we don’t hear of. These men and women sacrificed everything for this country; we need to make sure they’re taken care of. As with any charity type program, we cannot help those who do not want to be helped, but is sure worth a try, isn’t it?