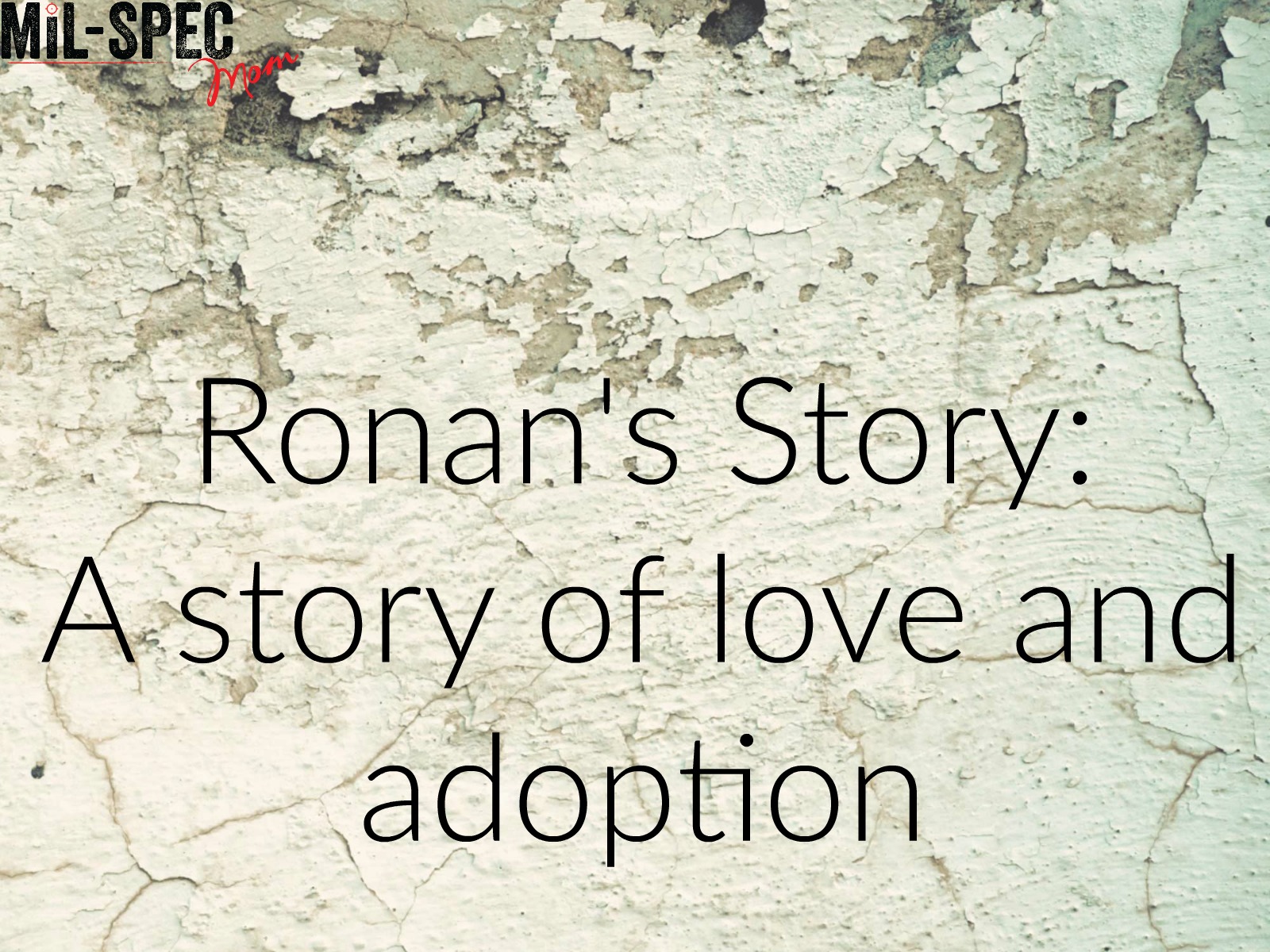 Ronan’s Story: A story of love and adoption

Today is my little monsters 5th birthday. Because of this, I want to share with you something personal; his story. This isn’t at all how I thought my life would turn out, but I couldn’t be happier or more blessed with how the Lord has worked all things together for His good. I never thought adoption, and life would be part of my life story.

There were some minor complications with his birth and I ended up losing a lot of blood. A surgeon had to be called up to fix the problem. I kept going in and out of sleep after they handed me, Ronan. I assume that the loss of blood was to blame for that. It was a scary hour but the Lord provided the right people at the right time to fix the problem and get Ronan and I all settled in for the night.
You’re probably wondering about Ronan’s biological dad at this point. Well, there’s not much to say. The bare minimum contact was met when it was convenient for him, but there hasn’t been much contact, especially recently. I’m ok with that. Actually, I find it a blessing. It’s been a bit of a legal mess, to be honest, but I can see the Lord blessing through that also. He works all things for good to those that love HIM!
I moved back to Missouri when Ronan was 2. I got a good 8-5 job that kind of fell in my lap; another blessing from the Lord. It wasn’t retail like I was expecting to find, but an office job with normal hours. It allowed me to put Ronan in daycare during normal hours in a warm, Christian environment that taught him numbers, letters and colors. Yet another blessing from the Lord!! It was difficult to pay someone to raise my child because I had to work a normal job. I cried on my way to work, after dropping him off, for the first 8 weeks easily. I learned to run errands on my lunch break so I could spend as much time with Ronan after work and school (what Ronan called daycare). We took weekend trip to Kansas City to see my sister and lots of trips to Bass Pro! Seriously, it’s like a free zoo! Fantastic Saturday outing. I was living it pay check to pay check, but I was making it. I was exhausted all the time, but I was making it. The bills were paid and I had a happy child. What else could I possibly ask for?
This kid. Any one that knows him knows what a character he is. His intelligence leaves me speechless more times than I care to admit. He keeps everyone laughing all the time. He is so sensitive and sweet! I can’t say enough good things about this kid. We’ve had our trials as all parents have, but his sweet spirit and love for learning and trying new things always amaze me. I couldn’t have been blessed with a better kid than Ronan. He walks right into your heart as soon as he walks in the door and leaves a Ronan size hole whenever he leaves. To say that he is precious just doesn’t cut it.

Then I reconnected with my now husband. Our story is odd, but I love it. I met him in Alaska ages ago, seriously like 10 years ago. We instantly made a connection over coffee and both being pastors kids. We kept in touch for a few years then I went to college and he deployed for the first time to Iraq and life got in the way and we lost touch. I had tried to find him a few times via Facebook (aka stalkbook) but to no avail; until December of 2012. He finally had created an account; about stinking time! I added him as a friend and left the ball in his court on if he wanted to initiate contact again. It’d been so long and so much had happened that it was a shot in the dark. Needless to say, he wrote me a long message and we’ve been talking ever since!
We got married November 8th, 2013. It was a truly magical day. His job allowed me to be the stay-at-home mother that I’d always wanted to be. Tim was the last piece of our family puzzle. He completed my little family in such a way that I could never have imagined. He has taken Ronan as his own and loved Ronan more than I ever thought a father could love a son. It’s hilarious to see them playing legos together and fighting imaginary dragons and pretend room clearing with a little plastic dollar store rifle. What else would you expect from a Firearms Instructor and his child!

I tell you this story because it’s such a special one. Ronan is special. Ronan was my rock for so long. He is what grounded me into adulthood. He forced me to mature in ways that I’d been avoiding. I’m so thankful for that! Tim has allowed me to share my load. Playing mom and dad is tough. Having someone to help me with Ronan and step into that father figure roll is possibly the greatest thing ever. I don’t have to be everything anymore. I just get to be a mom; the greatest job there is.
So my reason for telling you this crazy personal story is this. Children are special. Ronan is so special! The Lord has blessed Ronan’s life in a way that just amazes me on a day to day basis. I was petrified to have a child alone, I had the wonderful support of family and friends to help me in very practical ways. I thank God daily that he put those people in my life when he needed it. The Lord knew exactly what I needed and when. I cannot tell you why the Lord has blessed me with Ronan or my life, with Tim, since he came into it. I didn’t deserve it then and I still don’t now! The only thing that I know is that I am a Child of the King that ran from his laws and ways. I had some gnarly consequences but was ultimately blessed with the best little boy a mom could ask for.
*Update!* As of February 26th, 2016, my husband has officially adopted Ronan. Our adoption is complete! After 2+ years of a legal battle we are finally finished and able to move on with our lives. I think what meant the most about this day is that it meant nothing to Ronan. It was just another day with Dad, Mom, and little brother! I couldn’t have asked for a better example of a father to my son. As of August 2015, Ronan has a little brother named Killian that he loves more than anything in the world. My little family is complete thanks to God’s sweet mercy.

Last, but not least. I’m calling out the CHURCH OF GOD. It’s time to step up. It’s time to get off the pew and get your hands dirty. All people are responsible for their own actions, but I truly believe that if more people stepped up to disciple and INVEST in the lives of young people and young believers that there would be less unplanned pregnancy and pregnancy out of wedlock. I believe that drives so many women and men to Planned Parenthood is the lack of a better option in their area. If there isn’t a pregnancy resource center in your area maybe YOU should start one. I’ve seen it done. FAMILIES OF THE CHURCH OF GOD, we shouldn’t be pro-life, and anti-child. Just because a young woman chooses life doesn’t mean that your job is done! It doesn’t mean that they wont ever need help again. “Oh the woman had the baby, my work here is done.” NO! Step along side of her, guide her, teach her, HELP HER! Be Christ’s love in a practical way. Don’t just say, “Oh I’m praying for you!” and go about your day with your star bucks, fake nails, Lularoe Leggings, and MK purses. BE PRACTICAL! Bring her diapers, formula, watch the baby so she can take a nap! Help her make it to the well-child appointments. Bring her groceries! DISCIPLE HER! INVEST IN HER! You will not only change her life, but you will change the life of that little child.
Will you be put out? Yes. Will you be inconvenienced? Yes. Will it be eternally worth it? Absolutely. But it’s what the Bible tells us to do. I truly believe that if the church was doing what it was supposed to do that we wouldn’t have a need for Planned Parenthood, Public Housing Assistance, Food Stamps, Temporary Assistance etc. This is the Church’s job, not the governments.

I want to challenge you to get your hands dirty.
Cheers,
Nila

Handling Deployment Without Losing Your Mind