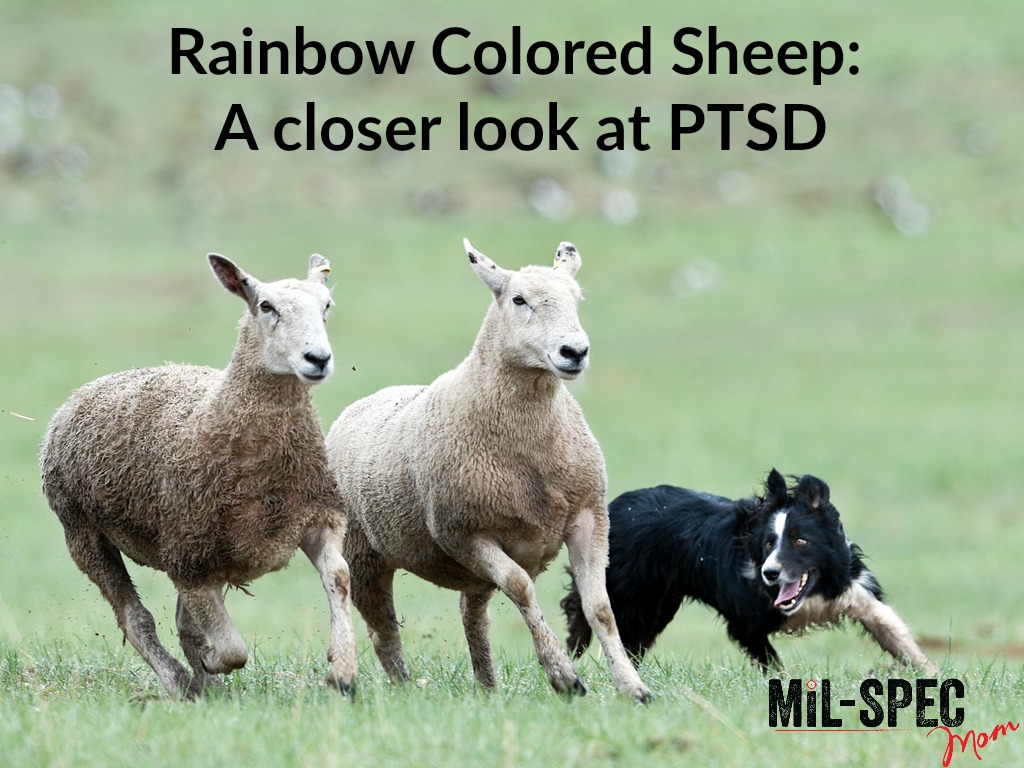 PTSD. Post Traumatic Stress Disorder. This is a closer look at PTSD.

The stigma around PTSD is astounding. It’s disgraceful really. Combat is rough; can you imagine the things soldiers in active combat see? Neither can I. And that’s ok. We can empathize without sympathizing. We will never understand. Some service members can’t even identify with other service members. Each and every experience is completely different. What’s not different is the fact that some “Joes” (Service members) need support when they return home from combat. I truly believe that it’s something that has a stigma too; a career affecting stigma. This is wrong. This is so very wrong.

Now for my narrative to explain, in detail, what these mean!

Imagine with me that you’re headed to Wal-Mart to do some last minute shopping before a large dinner party at your house. You scramble out of the car, purse dangling in one hand, cell phone in the other, keys hooked on your pinky while you’re trying to find your gum. You start shuffling quickly to the door checking your facebook in the parking lot to see what you’re missing. Keys get dropped somewhere in a pocket, or a purse, you aren’t consciously sure. You have no idea that there are two large, shady looking guys following you. (This is a prime example of condition white. You have NO idea what’s going on around you.)
One of the two guys whistles a cat call. Suddenly you realize you don’t know the two guys walking behind you towards the store. Your phone goes back in your pocket and keep an ear and eye out to see which way these guys go once you’re inside. Next, you look to find the nearest exit and see if those shady guys are meeting up with some others in the store. You lose them as you turn down an aisle to finish your shopping but you’re keeping a watchful eye and ear out on the situation and now you notice an exit towards the back of the store. (This is how yellow works. You’re not alarmed. You’re not paranoid. You are simply AWARE of your surroundings. You have a strategy.)
Suddenly as you reach for some tampons to hide in your cart you hear a commotion a few aisles over, towards the front of the store. It sounds like those guys who were behind you in the parking lot. One of them is yelling something about shooting someone and money. You’ve not recognized a specific threat is near you. (Color code orange!). You leave the cart behind; nothing is worth getting hurt over. You walk slowly to the end of the aisle to verify what direction the commotion is coming from and decide to go the other way towards that exit in the back of the store you saw earlier. As you dial 911 you hear a gunshot and realize the noise is following you to the exit.
One of the thugs grabs your arm as you’re shouting to the 911 operator to send the police. The guy releases your arm but waves a revolver in your face. He’s yelling something about helping him carry a hostage that he shot. (Color code Red: You’re ready for something catastrophic to happen). Frozen you start thinking of alternative options. You don’t have a gun or a taser, or pepper spray or any training or anything. Realizing you can’t fight back you just stand there crying; frozen in fear. This is code black. You’re in the middle of the fight and with no training of self-defense and you have no options. You’re stuck and you know it. The bad guys win. They have control over you.
That story right there is why having a degree of PTS or even just civilian awareness (and training, I can’t stress this enough) is so vital. Even if you were stuck in that situation, with some training you would have been able to handle the situation better. If my husband would have been present in that situation he probably would have gone to the store, gotten out of site, then turned around and left. Nothing at Wal-Mart is worth your life. Being aware of your surroundings does not mean you’re a paranoid tweaker. It means that you know what’s going on. It means you can identify a threat in its early stages so you can make the call to stand up and fight against the bad guys or exit the situation entirely. That’s YOUR call because you have the training and the mental capability to handle it.
So maybe our Soldiers coming back from war, having PTS is actually a good thing. They are aware and present and keep themselves and their families safe. They might actually keep you safe! What if that story above ended differently? Instead of it getting past color code RED, what if a Soldier tackles the instigator and his groupies run off? In doing that the hostage that was wounded would have been fine. Also, you would have been able to find the exit and get away. All because a Soldier was aware of his surroundings and realized something was happening before you even got in the door.
There is a huge difference between how PTSD and PTS are handled by the individual. One of those needs a reintegration period, usually with the help of a mental health care professional. The other person simply has a light switched turned on. They are alert to potential threats because that’s what their training has taught them to do. So next time you see a guy at the store who’s looking around a little strangely don’t automatically assume that they have problems. Their spidey senses might be tingling to something that you would probably never be aware of. Whichever type of Soldier you run into we should show gratitude, in a real tangible way, for their service to our country.
Cheers,
Nila

Ronan’s Story: A story of love and adoption

How to make your own Bug Out Bag