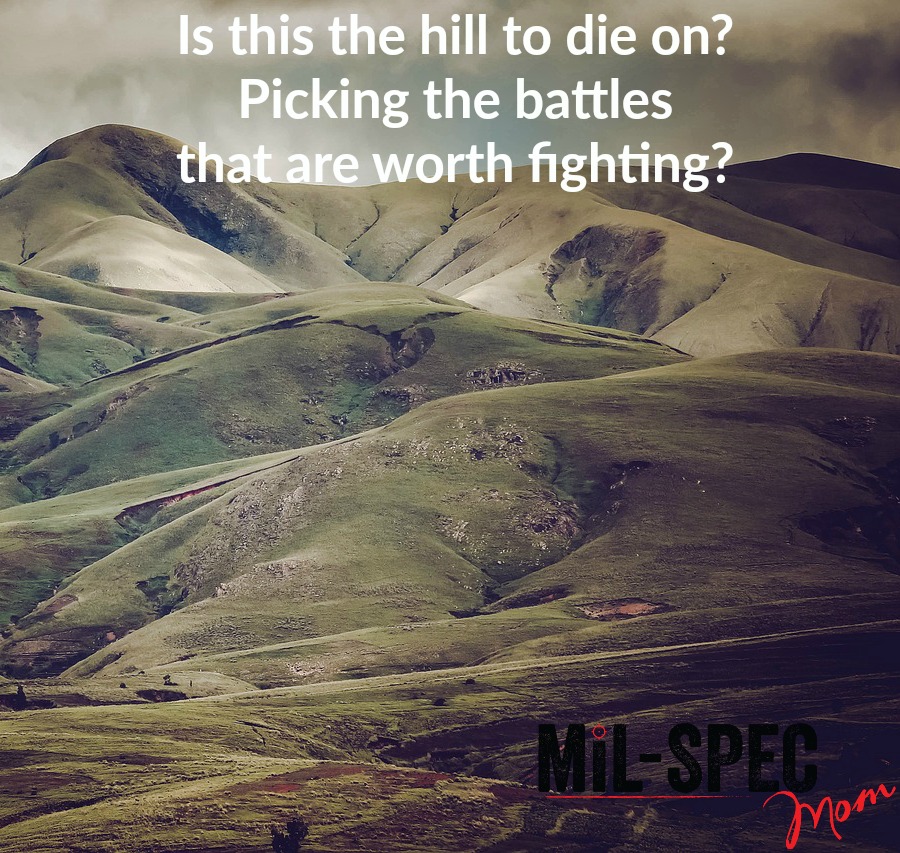 Is this the hill to die on?

Is this the hill to die on?

Where is the appropriate hill to die on? What does it look like?

What does this mean exactly? You know those hills where we plant our flag and stick to our guns on something that we believe to be right?

Well, in conjunction with “being those people” my husband and I have been having these internal battles on which hills are the appropriate hills to die on. Because they’re not all appropriate to die on. If you’re a toddler parent, you know this concept all too well. We’ve had many a conversation on whether or not we should address issues in our life. Whether it’s someone’s way of parenting is so offensive to your own, whether it’s someone egregiously disrespecting their husbands, or someone who makes a decision that could literally be life and death because they’re scared and lazy.

Which of these hills are the appropriate ones to die on? Which of these circumstances of planting our flag and confronting those people is the right one? In turn, which of these situations do we just need to frustratingly let roll off our shoulders and move on. As much as I hate to admit it, most of them aren’t worth dying on.

Over the last few years, my hubby and I have created somewhat of a criterion of how we confront issues in our life. I’ve shed many tears while my husband sat quietly stewing over the situation. We’ve also spent many hours praying together and separately, asking for wisdom. Some days we are left with no direction until we realize that that in and of itself is the answer we were seeking. Let’s dive into this:

1. Is dying on this hill going to fix the situation?

Most of the time, when we ask this question the answer is going to be no. Saying our piece isn’t going to fix anything. Not only that, but it might actually make the situation worse. Most people who make decisions that we feel are incredibly ill-fated, don’t care about others opinions and most likely won’t change. Is saying something going to make them suddenly learn the error of their ways AND change their ways? If the answer is no, just leave it alone. It’s not worth your time and energy.

5. Is dying on this hill going to save someone’s life?

Being in the firearms industry we see a lot of stupid things being taught. We also see a lot of people who fall prey to those who think they know what they’re talking about just because they have that ONE certification from the NRA that says they can sign off on a Concealed Carry Permit. We see a lot of people who think that just because they did their 4 years in a branch of service that they’re inherently qualified to teach firearms. This is a bunch of crap. We draw the line at, “is this practice/technique/way-of-thinking going to get you or someone else killed”? If the answer is YES, then we will say something. It’s offensive to us when people aren’t smart about firearms. It’s offensive to us when folks think they know better just because they took ONE-course years ago. Not only is it offensive, but it’s dangerous. So, if we feel that you’re going to get killed or get someone else killed; we will tell you that and why.

6. Is dying on this hill going to make me a martyr in a positive way?

There are times when being the martyr a good thing. By “causing a problem”, being “those people”, or saying something that can be offensive can we save trouble for others in the future? Possibly. It depends on who and what you’re dealing with. There are times where being the martyr is needed even though you will burn that bridge beyond recognition. There are times where being the martyr can save someone else a LOT of trouble. In turn, there are also times where it won’t save anyone and the offender won’t change their ways regardless. Sometimes this is just a risk we have to be willing to take regardless of the outcome. I think this hurts the most
honestly. Knowing that you’re “taking one for the team” and knowing that “the team” probably won’t even
notice. Again, this all goes back to what we feel led to do.

I think this post is just as much for me as it is for anyone else. Not everyone cares about our opinions or our feelings. That’s not how life works. Not everyone is going to like us and as I said above, we are NOT God’s gift to the world. We are NOT God’s gift to our town, to our church, to our circles of friends, or even the others moms at the school. We are only called to be us and who God wants us to be.

In turn, we are only responsible for OUR actions and OUR attitudes. We can’t change others, we can only make sure that our actions, attitudes, and ideologies align with the Bible and are God honoring. Even though it hurts us more deeply than words can describe. Find shelter in the Lord friends, it does get better.

I’m sure you’ve heard the old saying “time heals all wounds”. If you’ve ever had a loved one who’s passed away you know this isn’t true. Time makes it easier to handle. It makes it numb. Time makes it hideaway back in the recesses of your mind, but time does not heal.

How To Build A Great Ifak (individual first aid kit)

How to rack the slide of your handgun!