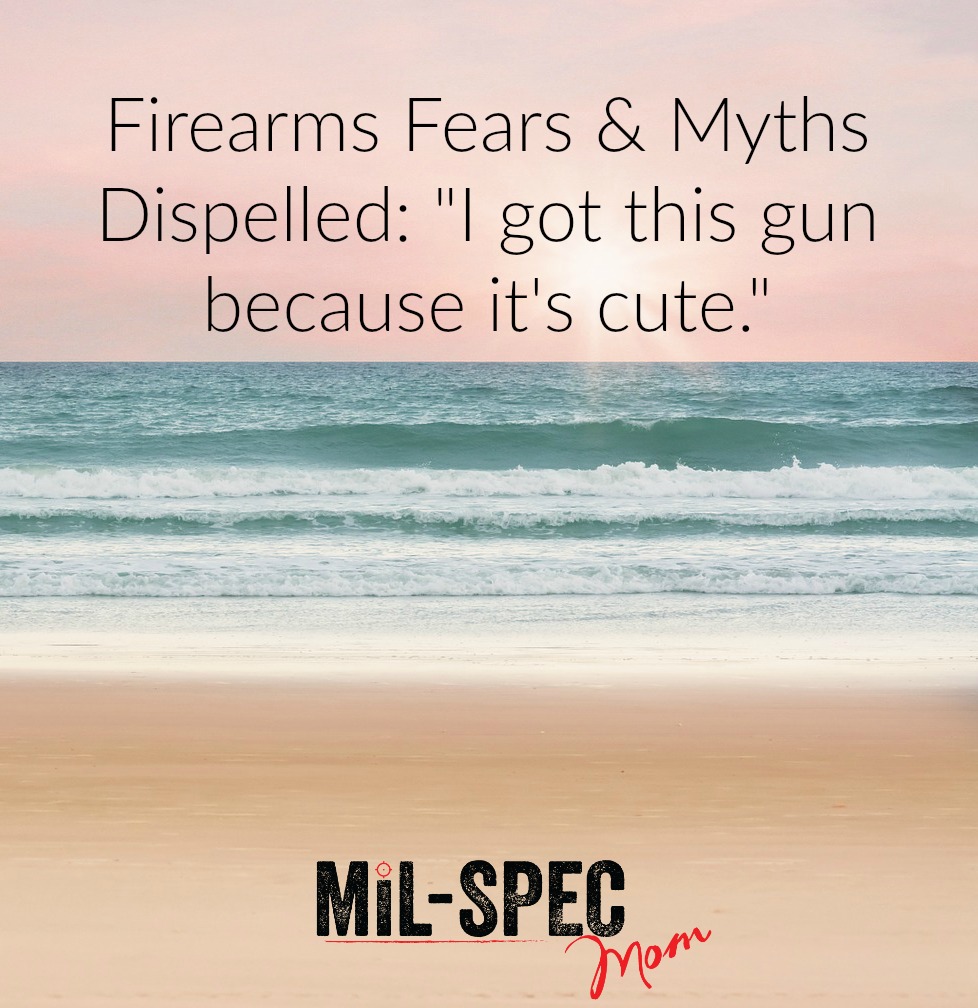 Fears & Myths Dispelled: “I got this gun because it’s cute!”

I got this gun because it’s cute

As we continue this series we’re going to talk about the mindset behind ladies and firearms! Firearms are powerful tools and demand respect. They’re not toys, a status symbol or even a symbol of our awesomeness or independence and empowerment as women. They’re tools that need to be taken seriously. They’re tools that have a command presence.

In this article I am going to seemingly “bash” a few common practices of ladies in the firearms community, or training and the women and weapons circles. Please don’t take offence to these. I’m simply trying to make your wheels turn so you can find your reasoning to do WHAT you do and WHY you do it. All conceal carriers need to have a reason or methodology for WHY they do what they do. Let’s talk about why we do what we do. It’s not an accessory we put on, it’s a life style choice we make with intent and purpose.

First, if you want to be taken seriously in the professional gun-fighters community, you need to use what the professionals use. Type in the words “operators”, “tactical”, “gun fighters” on Pinterest and see what kind of pictures pop up. Guys in tactical gear with black gun. Sure they might be tricked out with optics, magazine extenders, and maybe new sites, or lights and lasers. There is a reason that the professionals use those kinds of firearms. If you want to be taken seriously, you need to use the serious firearms and keep them looking serious. If you want to be taken seriously, make them look like what the professionals use. I don’t know about you, but I’ve never seen a professional operator with a pink leopard print handgun or bedazzled purple cheetah print holster. There’s a reason for that. It doesn’t matter how pretty your firearm is or how shiny your holster is if you can’t shoot, you can have all the pretty gear in the world and you won’t be taken seriously. What you have is not near as important as how to perform. Skill is everything. Just like we talked about in the 4th installment of this serious about calibers, how you shoot isn’t near as important as what you shoot. Remember this.

My conceal carry gun is a Glock 26. Very simple, no craziness save for a magazine finger extension, which is just a small lip on the bottom of the magazine that allows my pinky finger to have a grip as well, due to the small size of the firearm. Why? Because if I’m carrying concealed correctly, no one should know that I’m carrying, so what does it matter what my gun looks like? Think of it this way. If I use my handgun to defend myself, what happens to my handgun after that point? It’s evidence right? It’s locked up in litigation for possibly months or years. Why would I spend another several hundred dollars to make my gun “pretty”? It’s a waste of money. It’s just not practical or tactical. I can use that money to pay a bill, put into savings or buy a new pair of shoes. Dura coating (fancy painting the firearm) is hundreds of dollars. It’s almost as expensive as a handgun itself. Why is it necessary to paint the firearm that’s going to be down my pants 95% of the time? My opinion? It’s not.

Now, at the risk of sounding hypocritical for those who know me personally, I have a Tiffany Blue Rifle. It’s a beautiful Rock River AR15 with a free-float barrel. I LOVE the Tiffany Blue furniture (the plastic pieces on the rifle) and I adore taking it to the range to teach classes with. So, what’s the difference between my painted, pretty rifle and my black conceal carry gun? One is meant to be seen and one is meant to be concealed. I painted my rifle because it’s a firearm that’s meant it be seen! It’s meant to be out in the open. I can’t conceal my rifle, that’s not its purpose as my primary weapon system! My handgun (my secondary weapon system) is meant to be concealed. It’s meant to be a secret and hidden. So why should I spend money getting it painted? My husband also has a rifle that’s a tan camo pattern. It’s effective for the environment that he would use it in. But, it’s not a rifle for concealing. It’s an “out-in-the-open” firearm. Food for thought.

Now I get that a lot of ladies want their identity to shine through things they own. We all want customized phone cases and bumper stickers. We all want Pandora bracelets and matching bra and underwear. And that’s awesome! Go for it! But, your conceal firearm should be exactly what it’s designed to be; a defensive- under attack/life threatened/ self-defense/ lifesaving, tool! The flashier it is and the more flamboyant it is, we run the risk of wanting to “show people in private” or just flash it to a girlfriend so they can see the new Dura Coat job. How often do we tell our girlfriends when we get something new and cute? All the time right? Exactly my point! It’s called CONCEALED carry for a reason… Not “show it to my friends because it’s pretty” carry. My question to you is, what’s the purpose of having something flashy that begs for attention?

We need to safe guard ourselves from falling into the trap of talking about it and showing it off. If you want something cute and hot pink and secret, buy a new pair of underwear. Don’t use your firearm as this kind of outlet. On that same note, don’t use your gun accessories as this kind of outlet. This whole “concealed” principle and mindset applies to your purses and your holsters also. The more you blend in, the more the bag guys won’t see you. Also, a simple black holster is also easier to conceal. A flashy bedazzled purple cheetah print holster is not. Especially if it’s an Out of the Waist Band holster (OWB). Simpler is better.

Take a look at these two pictures:

If you had this, what’s the first thing you would want to do? SHOW IT OFF right? I mean seriously, the tiffany blue glock is beautiful! But how much more does that cost above a regular stock Glock 26. Is that money well spent if it’s meant to be concealed and will be under your clothing or in your purse the whole time? I don’t think it is!

A quick note about black guns; many ladies find them intimidating. Many find them downright scary. Yes, they’re black and they can be scary and the semi-auto’s do some things automatically (hence the name). BUT, the only thing that makes them ‘not-scary’ is training. I don’t want you to think that if you have a painted hand gun that you’re a horrible conceal carrier. That’s not my point at all! Quite the opposite actually. My point is twofold: First, it doesn’t matter what you carry if you can’t shoot it. Second, keep training! Your handgun and its colors are YOUR choice. Ok, I lied, one more point. Third, if you want to be taken seriously by the professionals, use what the professionals use.

I hope you didn’t take offense to this. And I hope you know that I’m proud of you for reading this and wanting to learn more regardless of what color your gun is. At least you’re shooting!

Fears & Myths Dispelled: “I don’t know anything about guns!”