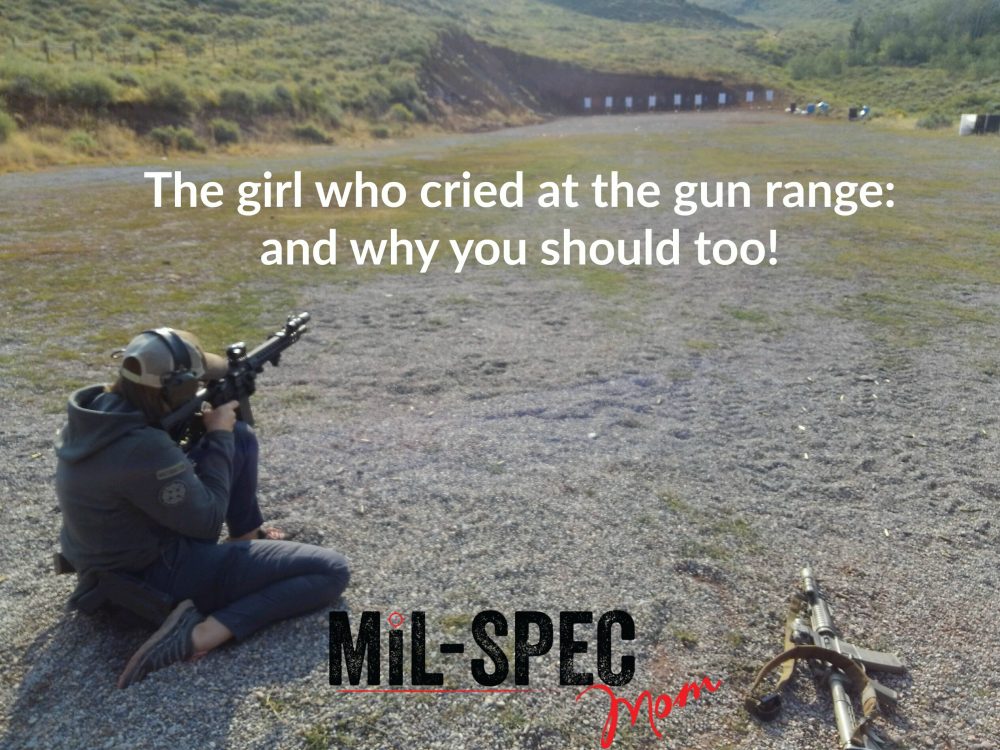 The girl who cried at the gun range

The girl who cried at the gun range:

I’m sure you clicked on this post because you wanted to hear a hilarious story about a girl who was brought to the gun range by her significant other (who can’t be bothered to show her how to hold a firearm correctly), given a gun, and told to hit the bullseye with absolutely no training or experience. Well, this isn’t that story. First, my husband has too much respect for the craft of gun fighting to let a novice be judged by the same criteria as a seasoned professional. But, this story isn’t about my husband either.

This story is about a girl, a gun, a training course that broke her, and why we should all push ourselves (or allow ourselves to be pushed by others) way past their limits.

If you’ve been following my blog within the last year then I’m sure you’ve read that I’ve taken a Costa Ludus course before. The company that I chose to take a course from does and doesn’t matter at the same time. It does matter because I must find someone who can challenge me. While I don’t consider myself a master of the carbine craft, I’m good. All our local fairs can’t challenge me enough anymore. I’ve taken several carbine courses with a local company, and looking at their curriculum now in comparison to a caliber of company like Costa Ludus (or other big names like Travis Haley, Larry Vickers, Kyle Lamb, etc), I am seeing how much I should have learned (and didn’t) and how much they should have covered, (but didn’t).

It also doesn’t matter because if you can find someone who can challenge you, who has experience in what they’re teaching, and is a competent professional (read more on that HERE) then you’re good to go.

I happen to love Chris Costa and his training company. He can challenge me, push me, and tell me to do better without being a jerk about it. That is a talent that not many in this profession possess. His curriculum makes sense too, it flows in a logical way which you start to see and understand when you take a multitude of courses.

I picked a level 2 carbine course simply because the time frame fit our schedule. We had a babysitter and dog sitter available to us so we pulled the trigger (pun definitely intended!). It wasn’t until after we were deep into the process of this course that I started second-guessing myself.  Sure, I’d taken 3 carbine courses previously (and had lots of one-on-one training with my federally certified firearms instructor husband). That would be fine, right? My husband said, “yes of course!” but he’s my husband, he kind of has too. ? He says he would tell me… but the jury is still out about that.

So, the first day was great. Sure, I was frustrated with the zero, because I just don’t like to zero. I am still learning that art form. We worked on marksmanship, fundamentals, and just had an awesome time. The second day we ran the gun like crazy. So. Much. Running. Seriously, I work out 5-ish days a week of hard cardio and heavy lifting, but I was sucking wind like crazy, much to my chagrin and surprise. During one of the small unit tactics drills, I was a little too close to the shooter on my left and some of the hot brass went down the back of my shirt. I’m always leery of this so I always wear tight crew neck shirts, but somehow it slipped down there and gave me an awesome burn near my armpit and my pant line because my shirt was tucked in and I couldn’t get it untucked fast enough. Later, that day we were working on the Vikings Tactics barricades. These barricades are tough because of the angles and shapes of the holes that you must shoot through require you contort yourself like a pretzel to get stable enough to put rounds on target. I must admit that I shot the barricade *ahem* several times. Point of frustration there. Chris went over small boat tactics and showed us how to make ourselves as small as possible. While I was doing nearly everything right, my support arm was a bit off kilter, thus resulting in epic brass burn #3. Chris had his hand right there, having the foresight of the Jedi Master he is, and quickly brushed the brass off. Nonetheless, my scar even looks like a .223 casing. Thankfully we were nearing the end of the day so I only had to hold myself together for an hour or so before we could leave and I could be a girl and cry in the shower back at the hotel.

The thing about being a girl in the gun industry is two-fold:

First, it’s stressful. We have to be better, stronger, faster, and smarter to be taken seriously in this industry, simply because we are females. If I am lacking a piece of information, it’s a huge deal. Whereas a male counterpart, lacking the same information, isn’t a big deal at all. It’s so much pressure and stress on females to be just as competent with guns as males, where many of us are lacking the military experience and the YEARS of running a gun that most men have. This is a good thing and a bad thing at the same time. Females are easier to train because of the lack of training scars that we have. It’s always easier to train someone who has NO experience than to train someone how to do a task differently than they’ve been taught previously.

The second aspect of being a female in the gun industry are “gun bunnies”. *insert sarcastic face here*. I’m sure you’ve seen them. The half-naked, silicone girls posing with guns, who have hundreds of thousands of followers. They know absolutely nothing about the tactics behind the firearm they’re fondling, but they get all the followers, notoriety, and the advertising contracts. Meanwhile, those of us who care about modesty, family, firearm knowledge, and tactical training get nada. Because my bra size doesn’t dictate my skillset as a shooter.

Then day 3 happened. I woke up stupid sore, tired, and just drained. I felt raw emotionally too, which surprised me. I’ve had two babies naturally and ran a tough mudder obstacle course. I know a little about pushing yourself to accomplish a task. But this class left me emotional, vulnerable, and exposed the holes in my training that I didn’t now know was there. I was embarrassed because of all that, on top of everything else.

Then we hit the plate racks. We did these drills with our pistols. I went into this drill somewhat confident because I teach pistol techniques 95% of the time. I teach concealed carry. This is my jam, yo! And……. I sucked miserably. While part of me blames the gun (I know I know ridiculous), most of me blames my lack of practice. My Glock 19 (gen 4) with Surefire X300 was failing me, or rather I was failing it. It was basic handgun marksmanship at 20-25 yards on a 6” steel plate. I tried my best, in my tired, sore, exhausted stupor, and I failed. I had to take a break and take a walk so I wouldn’t lose my shiitake mushrooms in front of 8 other dudes. It didn’t help. My husband noticed my emotion and tried to talk to me on the hike back to the main range and I essentially had to give him the “don’t talk to me or I’m gonna ugly cry all over this GUN RANGE” hand. He was frustrated that he couldn’t help me at that moment, but I know if I started crying that I wouldn’t be able to stop. I was that raw, that tired, that emotionally spent, that vulnerable, and that embarrassed by how much I felt that I sucked. I was able to wipe away the hot, angry tears before we made it back up to the rifle range.

Our next endeavor was affectionally called the trail of tears. It was a 1500-meter hike (approximately 1000-meter elevation) with shooting stations of steel targets from 200-300 meters away. I can’t even describe the difficulty here. But we made it down to the end of the day and I cried on the way back to the hotel, where I cried some more!

But here’s the thing, girls cry. We are emotional creatures. There is no shame in that. Sometimes we cry because we’re being ridiculous. Sometimes we cry because we’re being dramatic. But, sometimes we cry because it’s an emotional release after a challenging week. Sometimes it’s just our way of processing things. It doesn’t mean weakness either. For me, that week, it meant a frustration. I was shown where my training scars were. I was shown where my practice was working and where it wasn’t. This week was my breakthrough from being a good shooter and getting me on the path to be a great shooter. I needed to be shown my inadequacies so I can improve. I can honestly tell you that I have an entirely different perspective of myself as a shooter than I ever have before.  I have a sense of urgency to practice and a sense of empowerment that I can hold my own with a carbine.

So, in all this, I encourage you to push yourself. It doesn’t have to be a firearms training course (although spending the money for a Costa Ludus course is always a great idea), it can be a small business, a new skill set, your family, your job, a race you’ve been wanting to run. This concept literally applies to everything. If you’ve seen the recent Will Smith interview about his skydiving adventure (I’ve added it below in case you haven’t) he says that amazing is just on the other side of fear. This is what pushing yourself looks like. Push past the fear, the intimidation, the drama, and all the “I cant’s”, and be amazing.