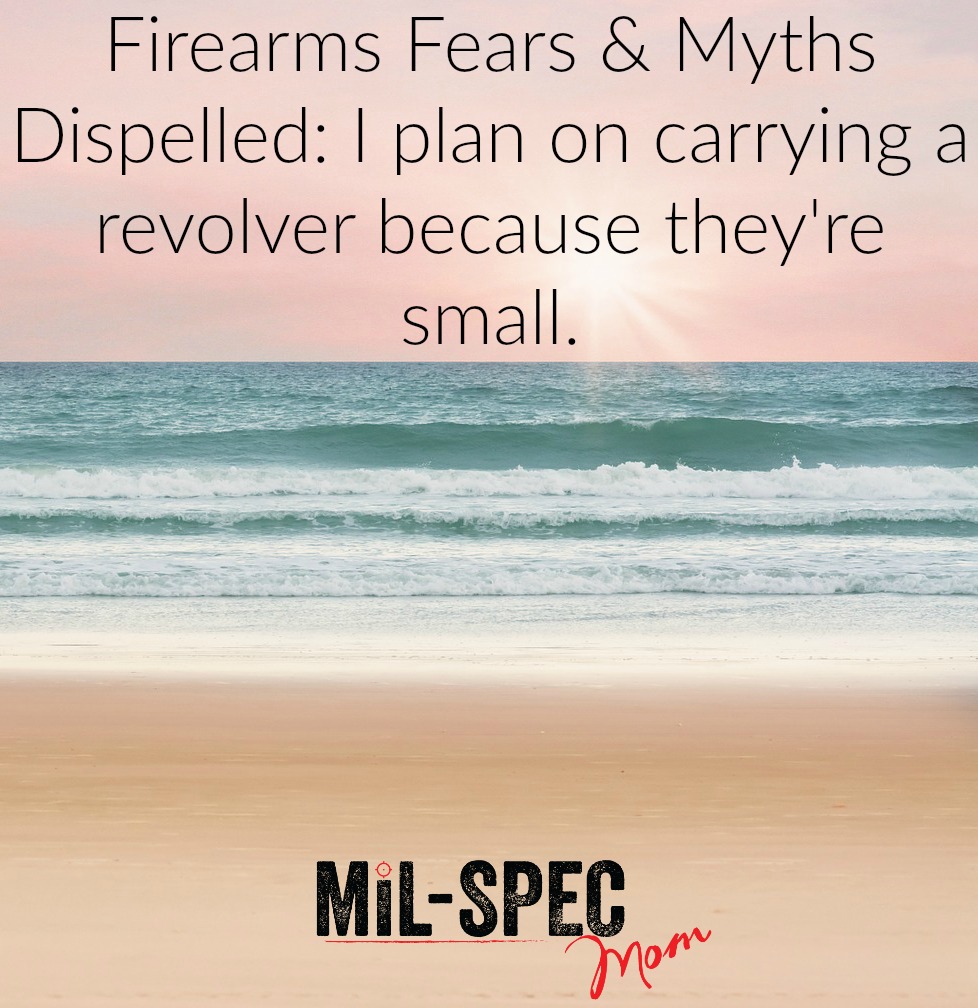 Fears & Myths Dispelled: “I plan on carrying a revolver because they’re small”

I plan on carrying a revolver because they’re small

In this series, I am continuing to dispel common fears and myths that some ladies have about owning a firearm and carrying concealed. So many ladies that I instruct are SCARED of this tool. So as we continue this series on common firearm fears and myths keep an open mind.

Today we are covering, “I plan on carrying a revolver because they’re small.”

I’ll be the first to admit that there’s really nothing wrong with carrying a revolver. They’re easy to fix if there is a malfunction; you just pull the trigger again until it goes bang! However, my issue(s) with the revolver are this. They only have 6 shots, there isn’t really a tactical advantage and it’s difficult to reload.

So let’s go through these point by point here. First off, they only have 6 shots. This bothers me. If a bad guy needs to be shot once, they need to be shot a few times. One question we always ask in our classes is “how many bullets does it take to stop a bad guy?” Answer? AS MANY AS IT TAKES! I want to know the threat is done. I want to make sure, beyond a doubt, that this person who chose to do evil, is no longer capable of doing evil towards my family. I like having bullets. I like having a lot of bullets. Bad guys travel in packs so just because one bad guy presents himself (or herself) doesn’t mean they don’t have friend waiting around the corner. I want to have the ability to defend my family to the best of my ability.

My every day carry gun is a Glock 26. We are a glock family. We love glocks. We recommend glocks. They’re simple, easy and effective tools. My primary magazine holds 8 rounds and I carry 1 in the chamber. My spare magazine has what’s called a “shoe” on it which is a little piece on the bottom of my magazine that allows me the space to add 2 more bullets to the magazine. I carry a total of 28 rounds. That’s a lot of ammo! That’s also a lot of protection.

My glock is small also. It’s very easily concealable. It’s small and effective! Furthermore, there is a smaller glock! A glock 43 is the single stack, sub-compact. Meaning it’s the same size frame as the glock 26 that I carry, but it’s thinner. Making it even MORE easy to conceal it. Glocks are also easier to carry concealed because there is more tactical equipment like holsters, magazines, magazines pouches (holders) just to name a few. My point is this; there are small semi-automatic firearms that are much more tactically sound and have much more round capacity and will give you a better chance of stopping the threat.

Second, there isn’t really a tactical advantage. Listen up ladies, if you want to be taken serious in this corner of the gun community you need to train like and use the equipment that the professionals do. Professional Operator don’t use revolvers. An operator is an individual that is specially trained to carry out a wide variety of specific, delicate missions with very little or no oversite. Basically the ninjas that wear all the kit with all the badges and tabs. Back to what I was saying, they don’t use revolvers. They use semi-auto hand guns, like glocks! Glocks have better round capacity (meaning they hold more ammo).

Lastly, it’s difficult to reload. Sure it can be done quickly and effectively, but for the average citizen it’s just not a quick. Now I’ve used something called a speed loader for revolvers, a few times, but again, for the average civilian it’s just not quick! I want to know that, with minimal movement and effort, I can get another 19 rounds in my firearm. For those who have a revolver and aren’t familiar with (don’t use) a speed loader, they have to reload their firearm ONE BULLET AT A TIME. That’s just not tactically sound for those critical situations where you might have to engage more than one bad guy. It takes a lot of time and a lot of hand-eye coordination. I don’t want to take my eyes off the threat for more than half a second, much less to reload 5 or 6 rounds.

Now, a revolver is a great back-up gun. When all else fails, at least you still have a firearm! But it’s not a good primary weapon system (your everyday carry gun). There are other options (semi-auto ones) that will serve your family better. Ladies, don’t be scared of a semi-auto handgun. It can be your friend. It’s not as scary as it looks. Just because it’s black and does some things automatically doesn’t mean you can’t learn about it. Semi-auto handguns are really very simple. You pull the trigger, it brings another round into the chamber and you get to pull the trigger again! The cycling process, (the bringing the other round into the chamber part) is the same with a revolver, when the cylinder rotates and lines another round up with the barrel of the gun.

It doesn’t have to be scary. You just have to take the time to learn and go to the range. Make the time to take a class and LEARN! I bet you’ll find a new hobby that you’ll not only enjoy, but feel empowered by.

Fears & Myths Dispelled: I don’t need a holster if I carry in my purse.