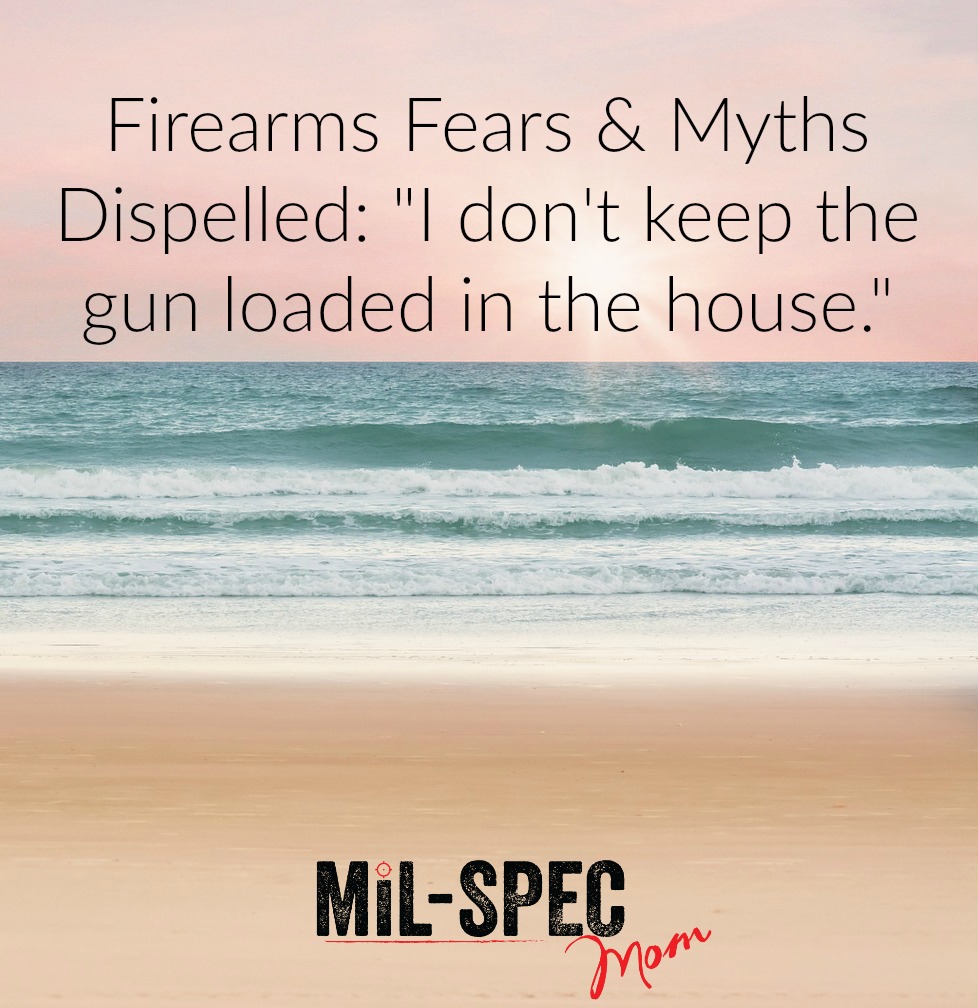 Fears & Myths Dispelled: I don’t keep the gun loaded in the house.

I don’t keep the gun loaded in the house.

Today we’re covering the concept of having a firearm in the house, but NOT keeping it loaded. Here’s the long and short of it. If you have a firearm, but it isn’t loaded, you have a paper weight. Plain and simple. This goes for those that carry concealed but don’t keep a round in the chamber. Can you tell me 100% that you can draw your firearm, charge it, and get a round down range while someone is coming at you with a machete? Think about that.

Let’s talk about something called the 21-foot-rule. This rule means that a bad guy with an edged weapon (knife, machete etc) can cover 21 feet before a TRAINED Law Enforcement officer can employ his firearm and fire one round. 21 feet people. That’s a long distance to cover in a matter of seconds. Law Enforcement Officers also have something like 40-80 hours of training on their firearms, depending on the academy. Granted, that’s not a ton of training, but it’s more than the average person you meet on the street. So, for an average civilian, with one or two firearms classes under their belt, what would be the distance the bad guy can cover before you can employ your firearm and fire one round? This is rhetorical of course, but I want you to honestly take some time and think about this. Oh, and by the way, the 21-foot rule is now called the 31-foot rule thanks to all the new drugs on the market. The zombies are faster now!

Now here’s my next point. Let’s set up a scenario. There’s a bad guy with a machete at 31 feet.  You’re carrying concealed, you have a full magazine, but you DO NOT carry a round in the chamber. Can you draw your firearm, charge it and fire a round before Mr. Bad-guy-with-a-machete reaches you? In all honestly, I don’t think I could without hundreds or thousands of hours of practice.

We have a family member who didn’t used to carry a round in the chamber in his conceal firearm. They said that they had trained to charge it when they drew it. Granted, they were fast, but it was always going to be a two-handed draw. So, being the stubborn family members we are, we asked them:

“What happens when you trip and fall and break one of your arms because you’re trying to get away?”

“What happens when your spouse is gripping one of your arms in fear, making it inaccessible?”

“What happens when the bad guy slices your tendons and one of your arms is useless?”

“What if you’re just not fast enough?”

There are so many things to consider with keeping the firearm unloaded. Firearms are one of those tools, like a fire extinguisher, that when you need it, you need it FAST!

If you heard your glass door break at 2 AM would you be able to access your firearm (whether it’s in a safe, on the dresser, in a nightstand drawer), load it, charge it and use it quickly? All while being half awake, in the dark, and scared too! I don’t have that 100% confidence in myself and my children’s lives are more important than that.

The remedy is simple. First, carry a round in the chamber. Second, if you are using this firearm for home defense then keep it in a safe that has an RFID opener like the Hornady Security Rapid Gun Safe

. Third, educate yourself and your family. Get training. Get your children training and work together as a family for the protection of your family unit.

There are many options for in-home safes. We use the Hornady Security Rapid Gun Safe

because it has 4 methods of entry. We had a bio metric safe, but in a practice drill to see how fast we could get it open, it took my husband 20 swipes of his fingers to get the safe to pop open. That’s ridiculous. In a critical stress situation where someone is in your house; that’s time wasted and possibly a life wasted! Another point to think about is having a light on or near your firearm. My hubby carries a full-size Glock 17 with a surefire x300 light mounted to it. That’s his every day carry gun, but in a situation where a burglar breaks in at 3 AM he has a flashlight all ready to go! How are you going to see in the dark to find the bad guy? Or identify friend or foe in the dark, half asleep? Positively identify your threat before engaging shadows on the wall.

It’s a well-known fact that all home invasions happen at home. Hardy har right? Well, something to think about is this: do you carry at home? I will admit that I don’t carry at home often. Being honest, it’s uncomfortable at times to get down on the floor and play with my 9 month old or chase my 6-year-old with a firearm on. But my compromise to this is making sure that it’s handy to me, but not for my kids. This compromise is having my firearm loaded, a round chambered, in its holster on top of the fridge. We have a really tall refrigerator and I know, beyond a shadow of a doubt that my 6-year-old can NOT get it, even with a kitchen chair. I’ve tried and tested this out to make sure. It’s part of being a responsible parent and gun-owner thing that I keep talking about. It’s common sense folks, that’s it. I want to protect my kids, but God gave kids parents for a reason. Sometimes we have to protect them from their curiosity.

I hope you’ll think again about, not only keeping a firearm in the house, but also keeping a round in the chamber. Go do more research and training and figure out what works best for you. The time difference between having a chambered round and having to charge your firearm to chamber a round could be precious seconds that could keep a family member alive.

I tried homeschooling, but I hated it!

Lost In The Forgotten Memories of TBI