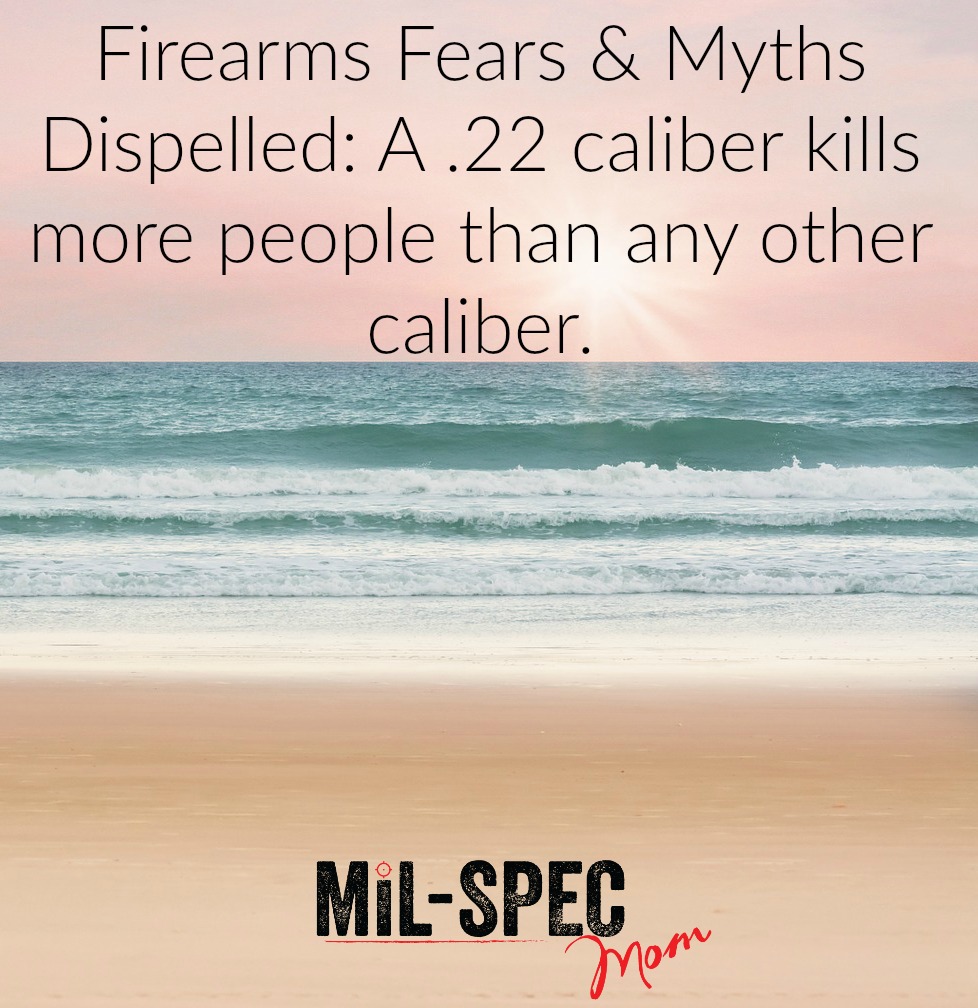 A .22 caliber kills more people than any other caliber:

Today we are covering, “I carry a .22 because I am faster and more people are killed by a .22 than any other caliber statistically.” / “I thought anything bigger than a .22 caliber would be too hard to shoot.”

Calibers. Possibly the most complicated aspect of firearms. I am not going to pretend to understand all the aspects of calibers and how they affect how we carry. But I am going to give you some good info on how to choose a good caliber, a reliable handgun and the perfect round.

Basically, what it all boils down to is two things. First, the bigger or heavier a bullet is, the slower it travels. Second, you are responsible for EVERY round that leaves your gun regardless of your intentions with it. What this means is that if you are a mass murderer then you’re responsible for each round that leaves your firearm. This also means if you’re shooting a threat and the bullet over penetrates the bad guy and hurts an innocent civilian, you’re still responsible for what happens with that person. Regardless of your intent. This is called criminal negligence. It is essential for every concealed carrier to get training regularly and often.

If you’re in a situation where there’s a bad guy in front of a crowd of people and you feel capable and compelled to stop the threat an easy solution to over penetration is simply take a knee. Firing your round, from a kneeling position, will impact the bad guy and go up towards the ceiling, theoretically, should it over penetrate or you miss. But sometimes bullets do funny things when they hit bone and tissue.

When you’re looking at 9mm ammo for example you will see that the grain size is different on a lot of the boxes. The grains are how much the projectile of the round actually weighs. 7000 grains equals 1 pound. Now we don’t need to get into the crazy of the grains and all, but what you need to remember is the larger the caliber and the heavier the grain the slower the round does.

A 9mm round will travel 2500 yards without falling. That’s almost a mile and a half! That’s a LONG for a bullet to travel before it even starts its decent! Gun Runnerz, a youtube channel of gun caliber gurus, did a test on this exact thing and a 9MM round will penetrate 10 sheets of 1/2’” drywall and 9” into ballistics gel. That’s basically 3 or 4 rooms that this round will penetrate and still be able to kill a human on the other side. THIS is why it’s important to understand the basics of calibers and grains and how it impacts your home defense firearm of choice. This is also why shot placement is key. Remember the 4th rule of firearm safety? Let’s refresh your memory. “Be sure of your target, what’s in front of it and what’s behind it.” Be aware of what’s beyond the four walls of your house and what your round could impact.

So the point behind my title. A .22 caliber is small; very very small. This is a great caliber for squirrels, rodents etc. It is said that a .22 round kills more people each year than any other caliber. However, this is not because they were shot with one round and went down. Compared to a .40 caliber or a 9mm, a .22 caliber firearm doesn’t have near enough stopping power to take down a human with one shot. Shot placement is key here. If you were to shoot them in the head, then maybe, just maybe you could stop the threat. So it can be argued that a .22 kills more people each year, but it’s because they bleed out days later (if they don’t seek immediate medical attention), NOT because he stopped attacking you.

So ladies, I want you to consider your firearm and ammo choices very carefully. It matters. It matters to how quickly and effectively you stop the threat and it matters to the civilians around you that might end up being your collateral damage depending on the caliber you choose.

So! What is the best caliber and ammo for self-defense? I use a Glock 26 which is a 9mm. The self-defense ammo I use is Hornady Critical Defense. It’s a great self-defense ammo because it has a rubber nose. When the round hits something the rubber nose denigrates into the bullet causing the bullet to ‘star’ and looks like a starfish. This is designed to create the maximum damage internally. According to the Hornady Critical Defense website the rubber nose also isn’t nearly as affected by clothing such as denim, leather, multiple layers, as normal hollow point rounds are. This gives me the maximum amount of stopping power possible in a self-defense round. (http://www.hornady.com/store/critical_defense)

Next thing to consider is this: what caliber is better? A 9mm or a .40 caliber? Let’s answer that. The first difference between the two calibers is size. A 9MM round is smaller than a .40 caliber round, but only by 1.2mm, which is almost negligible in my opinion. Naturally since a 9MM is a lighter/smaller round it travels faster than the .40 caliber round. But just barely! Again, the speed between the 9mm and the .40 is negligible! (Check out the link below for more stats).

This article from PoliceMag.com says that the FBI (and probably other subsequent law enforcement agencies) are switching from a .40 S&W handgun and ammo to a 9MM handgun and ammo. This article (http://www.policemag.com/channel/weapons/articles/2016/01/9mm-vs-40-caliber.aspx) says that it’s not so much the caliber of the round that you use rather than shot placement.

Think of it this way: What two things can stop a threat? A round to the brain or heart and loss of blood. Well, how many rounds does it take to accomplish this? There’s no way to tell! If I am scared, nervous, muddy, bloody, sweaty or running with my kid on my hip am I going to have great shot placement? Absolutely not! It might take a few rounds before I am able to get one in a vital area of my threat.

Fears & Myths Dispelled: “I plan on carrying a revolver because they’re small”

Fears & Myths Dispelled: “I got this gun because it’s cute!”