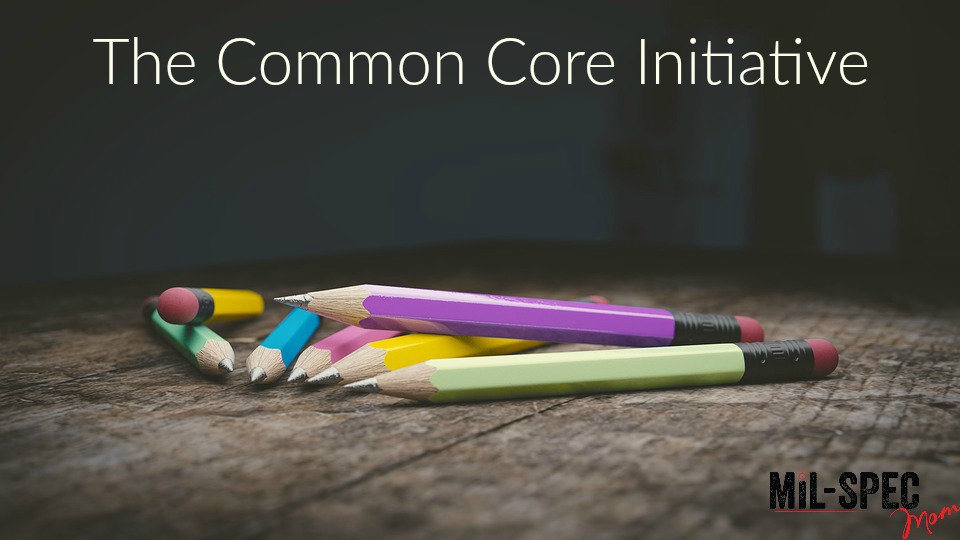 Facts and Opinions on the Common Core Initiative

This blog today is on Common Core. Let me start by staying that I am not an expert. Honestly, I’ve been working on this blog for weeks trying to get information and find facts, sources and some sort of logic behind this. I’ve done my best to site as many sources as I could find. I don’t want to start an argument with this blog, I simply want to share some of the information with you that I have found through different channels and hopefully open your eyes that the common core imitative is NOT simply a “set of standards”.

This photo tells me everything that’s wrong with common core and where the federal government is leading our children. This photo is of a 1st grade student’s homework. To answer the question in the photo one would have to get into extended math applications, which are NOT taught in the second grade in this form. You know why? IT DOESN’T MAKE SENSE TO THEM YET! They’ve not built their foundation for understanding math before jumping into this craziness. You don’t cover addition one day, then algebra the next day. It just doesn’t work that way. Our children’s minds don’t work that way!
When this type of crazy is introduced to our children us as parents are helpless to help them. The government is literally alienating parents from their children. The children are being swayed to think that ONLY the teachers can assist them in understanding their homework. This takes parents out of the picture almost entirely. I’m sorry but I have an issue with this. I birthed that little munchkin and I will absolutely have a say in his education, well being and everything else until he turns 18 and is able to have more of an opinion of his own.
Check out this article and youtube video:
http://www.realclearpolitics.com/articles/2013/04/09/why_msnbc__the_left_resent_good_parents_117868.html
https://www.youtube.com/watch?v=N3qtpdSQox0&noredirect=1
Does this scream SOCIALISM to anyone but me?? Seriously, the teachers (and subsequent government) are there to help my child where I cannot. Yeah, I don’t think so. My son(s) belong to my husband and I. They don’t belong to my neighbor, they don’t belong to my church, they don’t belong to my town, community, county, state or country. They belong to us. The constitution gives us the right to be a parents.

SECTION 1
The liberty of parents to direct the upbringing, education, and care of their children is a fundamental right.

The parental right to direct education includes the right to choose public, private, religious, or home schools, and the right to make reasonable choices within public schools for one’s child.

Neither the United States nor any state shall infringe these rights without demonstrating that its governmental interest as applied to the person is of the highest order and not otherwise served.

This article shall not be construed to apply to a parental action or decision that would end life.

No treaty may be adopted nor shall any source of international law be employed to supersede, modify, interpret, or apply to the rights guaranteed by this article.

http://www.parentalrights.org/index.asp?Type=B_BASIC&SEC={DE675888-E60A-4219-8A5E-000083244D13}&DE=
I think this amendment says it all, don’t you?
Other Sources:
Below is a bunch of resources that I used to compile this information. Being honest I am very against Federally Lead education so I apologize for my slant there. However I feel that the information speaks for itself! I couldn’t have compiled all this info without the help of my two friends Lanie and Erin! Thank you girls! All I ask of you, the reader, is that you take the time to research this also. Especially if you are pro-common core or a teacher or someone who just doesn’t know anything about it like I didn’t! It’s disturbing. It’s scary and the federal government needs to stay away from our children. If I remember correctly that’s the reason that each state has its own constitution and governors! Each State was originally created to be its own separate entity of sorts and the federal government was created to handle issues that could not be handled at the states level. The federal government was NOT created to be a kingship over our states like it’s trying to be.
http://www.breitbart.com/big-government/2014/07/19/7-differences-between-common-core-race-to-the-top-and-no-child-left-behind/
http://www.eagleforum.org/educate/marc_tucker/
https://vimeo.com/86129753
http://www.breitbart.com/big-government/2015/05/19/number-of-homeschooled-children-soars-in-america-up-61-8-over-10-years/
http://www.glennbeck.com/2013/04/08/the-whole-story-on-common-core/?utm_source=glennbeck&utm_medium=contentcopy_link
http://www.theamericanconservative.com/common-core-and-data-mining-fact-and-fiction-part-ii/
As with all my controversial blogs I ask that you be respectful to other readers and me. This is a hot topic with many folks for many different reasons. I also ask that you check out these links and do your own research and formulate your own opinion. It’s not just a set of standards.
Cheers,
Nila