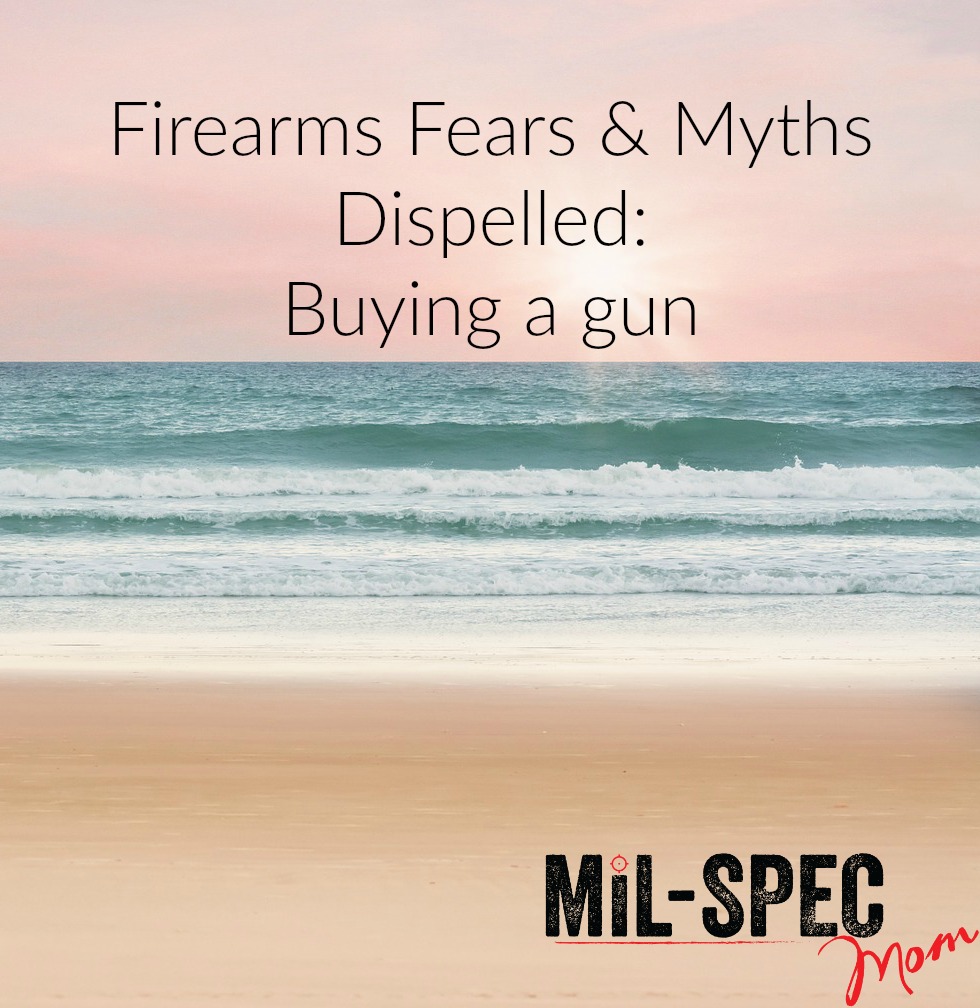 In this series, I am continuing to dispel common fears and myths that some ladies (all folks really) have about owning a firearm and carrying concealed.

Perhaps you have said,  “I just went with what the guy at the gun store suggested.” So many ladies that I instruct are SCARED of this tool. So as we continue this series on common firearm fears and myths keep an open mind. First, let’s recap the list:

We’re on installment 9 out of 10. Today we’re talking about firearm choices. So many ladies bring firearms to my classes that are just poor choices. When we ask them why they made that choice in firearms (like we do in all our courses) we often here “because the guy at the gun store said it was good.” Although we applaud them for buying a firearm and for taking a class in the first place there are definitely good firearms and other choices.

One of the most common firearms females use in our classes is the Ruger LCP/LC9. It’s cute, it’s tiny, but it’s also one of the more dangerous firearms we’ve come across. What it calls a safety mechanism we call a life and death situation. If you’re in a gun fight, if you have a lull in that gun fight, you want to do what’s called a Tactical Reload. This basically means just topping off your gun with a fresh, full magazine. Some I’ve heard the argument that people should be able to count rounds; this is why others want to limit higher capacity magazines. Well, that’s a load of bull hooey. When you’re literally fighting for your life, the last thing that you’re going to be able to do (whether you want to or not) is count everything round you fire. You’ll be too busy fighting for your life to care how many rounds you’ve fired as long as you go home alive.

This is why doing a tactical reload, when you have a lull in the gun fight, is vital. Just because they’re not firing right that second doesn’t mean they won’t start up again when you try to move toward safety. Just because your first threat stopped with 2-3 rounds doesn’t mean the next threat will stop with the same amount. Just like when you have one single threat and it’s neutralized, doesn’t mean that the next threat won’t be a group of people, or a single individual that will not stop with the normal assumed 2-3 rounds. You may need that new, fully loaded, magazine to stop the next threat. (insert madness, drugs, alcohol etc here).

So here’s the thing about the Ruger LCP and the tactical reload. When I’m doing a tactical reload, I still have a round in the chamber. My current magazine isn’t empty; it’s just partially used. This way, if the firefight starts back up again, I still have that one round that can save my life, until I get that new magazine in and get my gun back in the fight. With glocks you can fire that one round without a magazine in the gun. With the Ruger LCP you CANNOT. Which means if you don’t have a magazine in your firearm, but you have a round in the chamber, you’d be better off just throwing the gun at the bad guy. That’s really all you can do anyway.

Another way the magazine disconnect feature hinders training is dry practice. Roughly 90% of our drills that we do at the range can be done at home, dry. Meaning without ammo. With that magazine disconnect feature you can’t practice at home, which means little to no training, which means you can’t get as familiar with the firearm as you could with other brands. Also you don’t get that muscle memory that’s going to take over in a critical event.

Now, Ruger calls this a safety mechanism. But, like I said above, to us, this is deadly, in my opinion. That one round may make or break my ability to go home to my family after that fight. That one round can’t help me go home to my family, if I can’t get it out of the gun. A question to ask yourselves is this: what if that was your absolute last round. The bad guys are closing in and you have that one single round left. In short, you’d be screwed. However, Ruger manufactured a PRO model to the Ruger LCP which they don’t include the magazine disconnect feature. This allows you to fire that one round in the chamber without the magazine in the firearm.

Check out these websites for more info:

My main point here is this: Don’t fear! Yes, there are fancier, better, firearms out there. But, the normal average civilian can’t outshoot a glock. Glocks are common! So equipment and replacement parts are easy to find. Glocks are cheaper. So if your firearm gets tied up in litigation because you used it for self-defense, you’re only out roughly $500 rather than $1200. Glocks are so easy to use. They’re simple firearms. They have 3 internal safeties, so they’re well-made and they’re durable! We’ve run ours through several courses and literally thrown them on the ground and they’re functioned like a champ.

Something to consider for your future purchase. Another firearm that we commonly get in our courses are revolvers. Click this link for our thoughts on revolvers:

Cheers and No Fear,

Vlog: Your Tactical Advantage with Open Carry vs. Concealed Carry